It’s time for Democrats to fear their own voters

Republican politicians fear their base, while Democratic politicians don’t. That’s why we are in this mess

After the overturning of Roe v Wade, there is bad news and there is good news. But first, an admission.

For most of my adult life, I’ve clung to a grand unifying theory: the only way to fight off rightwing fascism is to build not just a well-organized progressive movement, but to also mobilize rank-and-file apolitical Democratic voters to press their own party to deliver. 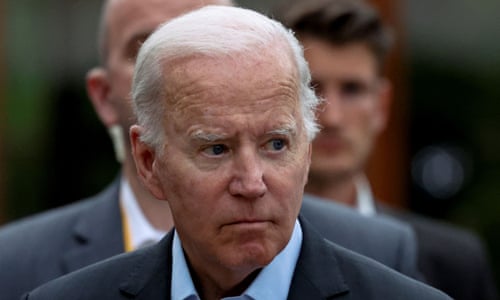 If Democratic base constituencies – college-educated white-collars, communities of color, young people, etc – went beyond merely voting in November and actually made demands of their Democratic lawmakers (and held them accountable in primaries), then maybe the party would pursue its purported agenda with the same urgency as the Republican party does for its conservative base. And if that happened, maybe more voters would flock to Democrats who were materially improving their lives.

Over the last 25 years, the opposite has happened.

While Republican normie voters were being radicalized by Fox News and talk radio, Democratic normie voters were being anesthetized by NPR, the New York Times, the Atlantic and MSNBC, which taught them to believe that an extremist like John Roberts is a lovable moderate, Mike Pence is an American hero, George Bush is a decent guy, and an operative who installed Sam Alito on the court is a warrior for democracy.

That media machine convinced Democratic normies to believe the highest calling of citizenship was to simply line up behind party-approved candidates, crush progressive challengers in primaries, and “vote blue, no matter who” in general elections – and then do nothing more, even when “electable” conservative Democrats lost and the few winners produced no change. The worst thing anyone could do, they taught viewers, was criticize, pressure, or protest Democratic leaders to try to get them to do anything.

At the same time, Barack Obama and his administration persuaded normie Democrats that the celebrity candidate would save the day, that progressive pressure campaigns are “fucking retarded”, and that Obama’s hand-picked candidate, Hillary Clinton, was the most viable successor. Meanwhile, the labor movement was crushed by Democrats’ trade deals and corporate union busting, disempowering what had been a radicalizing force inside the Democratic coalition.

And yet, here’s the admission: it wasn’t just external factors that undermined this effort to mobilize normies. It was a failure of an entire generation of operatives, activists, advocacy journalists, policy wonks, philanthropists, filmmakers, pundits, labor leaders, thinktankers, Capitol Hill staff and politicians in left-of-center politics – and I include myself in that group of failures.

***
We could console ourselves by feeling like Don’t Look Up’s Dr Mindy when he points up at the comet and says: “We’ve been trying to warn you!”

But let’s admit it: the campaigns, advocacy and pressure of my generation and the Boomers did not radicalize the normies quickly enough. We were not just outgunned by conservatives, outspent by corporatists, and undermined by liberal careerists selling their souls for the next hot take – we were also outmaneuvered, outsmarted and outperformed.

We failed, and that failure allowed Democratic leaders to never fear their own base – to the point where Democratic voters gave their presidential nomination to the candidate who authored the crime bill, allied with segregationists, championed the Iraq war, touted social security cuts, voted to let states restrict abortion and sharpened bankruptcy laws.

So here’s the bad news: because this dynamic allowed Democratic leaders to never feel the heat of accountability, they never wielded their power to make a serious effort to avert the current nightmare. In many cases, they did the opposite.

The Obama presidency was defined by initiatives to prop up health insurance predators, protect Wall Street criminals and abandon promises to Democratic voters, which created the backlash conditions and depressed turnout that helped lead to Donald Trump’s ascent. The Biden presidency has been similarly defined by the party living up to the president’s promise that “nothing would fundamentally change” – and its attendant unwillingness to materially improve the lives of anyone other than billionaires and corporate executives, all while the administration boosts various rightwing causes.

The crescendo of this phantasmagoria has led to this grim reality: As conservative justices now turn on a spigot of extremist rulings, the Democratic president is giving half-hearted speeches pretending he has no power, and issuing reports declining to even support expanding the supreme court – due to concerns about protecting “its independence and legitimacy”.

For their part, Democratic congressional leaders are singing patriotic ballads while sending out fundraising emails. They expect yet another positive response from a base that up until now has politely asked for – but never really demanded – anything from them in return.

If you’ve somehow read this far, you are probably gut-punched. But here’s the good-news payoff for still being here: yes, there are signs that at this dangerously late hour, normie Democratic voters may finally have had enough of this shit.

Last month, a stat buried in an NBC News poll showed that nearly two thirds of Democratic voters said they now want a candidate “who proposes larger-scale policies that cost more and might be harder to pass into law, but could bring major change”. Just a third said they prefer a candidate “who proposes smaller-scale policies that cost less and might be easier to pass into law, but will bring less change on these issues”.

Put another way: 63% of the party is finally radicalized, and just 33% are still clinging to the normie view. This might explain why a group of progressive congressional challengers recently overcame the odds and won their primaries, even against party leaders’ endorsements.

At the same time, a Fairleigh Dickinson University survey found a plurality of Americans no longer buy Democrats’ argument that they have no power to do anything – and that includes a quarter of Democrats and nearly half of independents. A full 50% of Democrats say Joe Biden has power to reduce inflation and healthcare costs.

Quinnipiac’s new poll also shows just a quarter of young voters approve of the way Biden is handling his job, and his numbers are similarly low among Black and Latino voters.

Taken together, this is empirical proof that core Democratic constituencies may finally be evaluating their party’s president on his actual record, rather than just mindlessly cheering him on because he’s wearing the blue home-team jersey.

This healthy attitude is starting to seep into popular culture. As one example: The Daily Show – historically the normiest of normie Democratic television programs – is now openly mocking party leaders’ refusal to do anything to stop the Republican onslaught. As Democratic policy wonk Will Stancilput it, that’s a sign that “anger at do-nothing Dems really has gone completely mainstream in a way that seemed impossible three or four years ago”.

If history is any indication, that’s good. Democratic leaders only did things like enact social security, create Medicare, pass the Voting Rights Act and end the Vietnam war once they feared the electoral consequences of inaction. The same dynamic holds today: you can bet Democratic leaders will not fulfill their longtime promise to statutorily codify reproductive rights until and unless they feel the same kind of anger and pressure as their predecessors felt in their day.

“Politicians respond to only one thing – power,” wrote Ta-Nehisi Coates back in 2011. “This is not the flaw of democracy, it’s the entire point. It’s the job of activists to generate, and apply, enough pressure on the system to affect change.”

That’s how the American right ultimately brought us to this horrible moment: They conditioned Republican voters to actually expect and demand things, and punish those who wouldn’t deliver.

That same attitude is what’s needed from Democratic voters now – not just rage aimed at the conservative ideologues turning back the clock, but also rage at the Democrats who control the government today. Those elected officials must be forced kicking and screaming – against their own desires – to actually produce. Not tomorrow. Now.

Of course, many of us have been saying this for decades – and have been berated and belittled for doing so. But at least for a moment, it finally feels like we’re no longer alone.

If that’s fleeting, we’re screwed. If it’s enduring, then there’s still a tiny glimmer of hope.

Timothy Miller is a repentant ex-Republican operative, now a key member of “The Bulwark.” This is a group of mostly like-minded  onetime GOP operatives, now Never Trumpers, still “conservative” on many issues, but dead-seriously dedicated to preventing #45’s overthrow of democracy, and who may well have — at least I hope so— the brains & skills to do it.

Yet with a long record of putting his talents effectively to work for many who have become bigtime Trump loyalists and fascism accelerators, not to mention being a completely closeted hit man for many professional political  homophobes, Miller, as the saying goes, has a lot of explaining to do — first all, to himself.

Hence, Why We Did it, just published last week. Fittingly, it’s both a personal confessional, and an insider apparatchik’s look at the rise and reign of you-know who. This latter category is a crowded one at most bookstores, with new entries popping up every week or so.

Will Miller’s book stand out in this crowd? I don’t know yet. And — full disclosure — I haven’t read all or most of the similar output, and don’t plan to. Life is short.

But in 2020, deep in the gloom of the pandemic’s first autumn, I was captivated by one of the other major confessional tomes, Disloyal, by Trump’s longtime fixer, Michael Cohen. That experience produced a review, not only of the book but of its times, that filled several posts (which can be found here). END_OF_DOCUMENT_TOKEN_TO_BE_REPLACED

I’m not in the habit of taking political advice from rightwing websites.  Never mind a site started by Tucker Carlson; or from anything else associated with the top Fox News motormouth.

But the headline below, I admit, gave me pause today. So here it is, with some comments in bold dark red.

The Daily Caller: The Democrats Only Have One Hope For 2024, And He’s Already Beaten Trump Twice
Hayden Daniel — May 3, 2022

Though it’s still over two years away, Democrats are beginning to panic over the 2024 presidential election.

Can’t argue with that.

A humiliating withdrawal from Afghanistan,

— “humiliating” is YOUR word, Dude. I still give Biden points for biting that awful bullet.  Yeah, the execution sucked, and there’s other fair criticisms to be made, but Biden had the stones to do  what should have been done years ago– END_OF_DOCUMENT_TOKEN_TO_BE_REPLACED

So: I went in for a thorough cardio checkup, a long  overnight at Duke Med. As the capstone of the process they stuck me in this MRI machine for a long hour of lying stock still on my back, eyes closed and hands slowly going numb under the barrage of whanging and zapping aimed at discovering what if anything functional was left in my upper torso.

In cardio terms, the MRI was a success: they said my heart was pretty much okay for a guy my age: go home, take the pills, and keep in touch.

But an hour later, when I clicked the news on the iPad, I got an eerie sinking feeling: maybe there had been more to that big machine than just a very noisy electronic stethoscope. What if it was also a reverse time machine, doubtless part of the CIA’s vast secret UFO research: when they rolled me in, it was 2021. When I came back out into the light, in much of America it was 1964, or maybe 1953.

Not that I was younger, or anything good was back from those days (big Hershey bars for a nickel, Cokes for a dime, and Elvis on the juke box). Instead, 56 years of civil rights history was gone. While I was in that light beige reverse birth canal, the Voting Rights Act disappeared. END_OF_DOCUMENT_TOKEN_TO_BE_REPLACED