I have written and posted a Quaker tale for Valentine’s Day, Esther & The Heathens, our version of Romeo & Juliet. There are several original illustrations in the story, by an African American artist who deserves much more recognition than she has received.

After much searching on the net, I was able to ferret out enough data for this tribute, to the late Charlotte Lewis.

Note: Much of this material was copied and adapted from a webpage that can no longer be found.

An artist, activist, teacher and tireless community worker, Charlotte LaVerne Graves Lewis was born on May 1, 1934 in Prescott, Arizona to Lillian and Charles Graves. In 1937, the family moved to Portland, where Charlotte grew up, showing artistic and academic precocity at an early age. After graduating from the Portland Art Museum School in 1955, she pursued a career as a graphic designer, then lived in San Francisco and Philadelphia for several years before returning permanently to Portland.

[It was while she was living on a communal farm west of Philadelphia that I (Chuck Fager) met Charlotte, in 1977. Her art work immediately impressed me, and it was then mostly in a style very different, almost pointillist. Later, when I was able to (i.e., working fulltime), I commissioned Charlotte to do a number of illustrations for me and for some of my writings. Her work was always striking and distinctive. Several examples are below.]

In the late seventies, Lewis decided to devote the rest of her life to community work. She began creating art for groups such as the American Friends Service Committee, the Urban League and the Rainbow Coalition, among others. “More and more her art began to reflect her community and the dreams, beauty and history she found there,” recalls longtime friend Susan Bloom. “Once she moved in the direction of creating community art and art about the African-American community, the world community she didn’t waver—it was her true path.”

Lewis’s large-scale public projects include the African-American history mural on the side of the Irvington Covenant Church building at Northeast Martin Luther King, Jr. Boulevard and Shaver Street. Another mural, Struggle and Hope, was a collaborative effort with other artist-members of the Portland Central America Solidarity Committee, depicting the history of U.S. involvement in Central America. Next came a mural at Outside In, a drug treatment center for youth. “You can always recognize one of Charlotte’s paintings—her people, especially the women, have a very beautiful and unique life-force.”

In 1992, Lewis contributed to “We Speak,” a portable teaching mural that exposed the hegemonic bias of the Columbus myth while offering a positive vision for social change. Lewis’s uncompromising view was that art should be for the people; her mission was to use art, not only as decoration, but also as a tool to inform, teach and call attention to the often overlooked achievements of African-Americans.

In 1992, Lewis invited fellow artist Adriene Cruz to exhibit with her at the Graystone Gallery. In preparation, the two artists made several retreats to the home of a friend in Yakima, Washington, a time Cruz recalls as magical: “Everything was in our favor from the beauty of the landscape to the agreeable weather. We worked outside until the sun went down and continued inside until the sun came up again. We were children discovering something new every day . . . and our work was forever changed from that experience.” During this time Lewis created her first “fabric painting,” the vibrantly colored triptych Isis, permanently on display at the North Portland Branch of Multnomah County Library.

Lewis is especially remembered for her work with children. For many years she taught at the Black Educational Center in Portland and in Portland public schools. At the Interstate Firehouse Cultural Center, she curated an exhibition of found-object art collected and crafted by community children. She also used art as a means of bridging cultures and allowing African-American students to reconnect with their heritage, introducing them, for example, to the Senegalese dignitary Cheik Ibrahim Niang, a world expert on AIDS.

Although she had no children of her own, “her true love for children and their accomplishments was a powerful part of her,” Bloom relates. “Her joy and excitement when she could move someone to explore their unexplored artistry was profound and I always felt enriched to witness it,” Bloom relates. To the students in Lolita Darby’s fifth-grade class, Lewis was, literally, a hero, a “Local Hero,” identified by the children as someone from their own community who had made a difference in their lives. Her involvement in the “Local Heroes” project developed into a long-term mentoring relationship with Darby’s students.

A page of Charlotte’s art is here.  Unfortunately there is no information there about these works, when, how or why they were made. 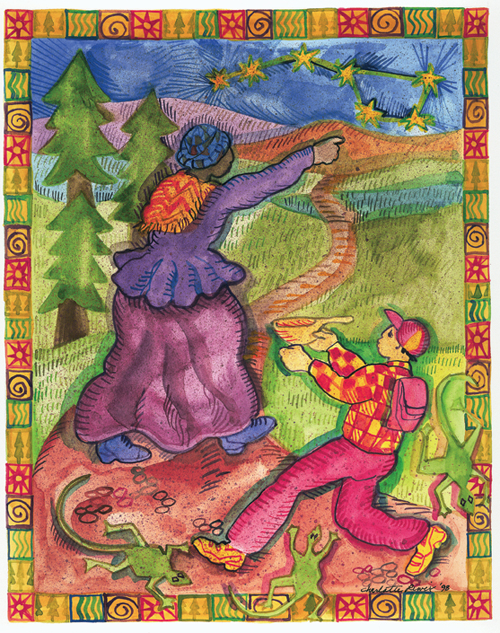 One of Lewis’s last accomplishments was a series of beautifully illustrated brochures for the Healthy Birth Initiative, a program designed to teach young mothers and fathers how to take care of their infants and children. According to Bloom, “If you saw the brochure you would feel that you had to go to this program—that’s just how her art was, it made you feel like you wanted to be there, whatever the event.”

In December of 1993, Lewis organized her first exhibition celebrating the African-American holiday Kwanzaa at the Interstate Firehouse Cultural Center, an event which became her annual gift to the community. Adriene Cruz joined her for the next four celebrations. Bringing individuals and organized groups together, they orchestrated a magical presentation of colors, textures, tastes and smells—with candles, traditional African foods, artwork, and always their own handcrafted quilts.

Her last Kwanzaa celebration was held at the North Portland Library in 1998, an amazing testament of her strength and perseverance during her battle with cancer. She died months later surrounded by family and friends on August 17, 1999. She was sixty-five.

Three sketches she created by commission for
Esther & The Heathens:

Esther: Is she being disowned? What for?

Esther: Prelude to a Kiss?