A few days ago, a post on a Quaker Facebook group asked what the Quaker position was on dealing with insurrection.

An excellent and, er, disturbingly timely question. To which, of course, there is not a single Quaker answer.

To my mind, the best way to approach it is to look at live examples in our history. And here is one:

In the decade before the U.S. Civil War, many of the strong abolitionist Quakers (who were, we must note for the sake of truth, were then the radical fringe, loudly despised and marginalized by the Quaker Establishment) formed groups under the banner of Progressive Friends.

The largest of these groups gathered in Longwood in Chester County, southwest of Philadelphia, in an area now known as the “Mushroom Capital.” There they soon built a meetinghouse which still stands.

Once underway, the Longwood Progressives quickly got down to business, launching a many-pronged assault on the recalcitrant status quo: on one side, they sent out volunteer “missionaries” to spread the Progressive gospel by organizing meetings wherever way opened.

On another, they adopted stirring resolutions, called “Testimonies,” denouncing a catalog of evils and calling for government and other action to end slavery  at once; grant equal rights to women; challenge the disparities of wealth; abolish the sale of alcoholic drinks; reform the prison system.

And not least, they called for an end to war & war preparations. Twice they urgently petitioned to the federal government about this, noting that:

“. . . impressed with the awful sinfulness of War, and its demoralizing tendencies upon the human race, we are impelled, by the spirit of our religion, to propose to you, the legislators of our beloved country, that in accordance with the progress of the spirit of the age, an arrangement be entered into to settle all disputations with Foreign Powers, by reference to an Arbitration of Nations.
We also earnestly desire the abandonment of all fortifications and preparations for war, the abolition of the army and navy, and of all military schools, over which the Government of the United States has jurisdiction.” (1853; 1855)

A mere six years later, on April 12, 1861, the newly-formed Confederate artillery opened fire on the federal Fort Sumter in the harbor of Charleston, South Carolina.

That bombardment in South Carolina did more than breach the outpost’s defenses. Its fallout also landed hundreds of miles away: In particular, the war it started blasted holes in the “walled garden” of a then-Quietist and separatist American Quakerism.

It most thoroughly scrambled the thought and actions of the Progressive Friends, and if history has may lessons, perhaps we can find some here for our current plight.

But after Fort Sumter, the calamitous first Battle of Bull Run, and the rise of war fever, the Longwood Progressives, battered by history unfolding around them, changed their tune.

By June 1862, with the war’s outcome still much in doubt, their revised  “Testimony” on War (Peace) threaded their way through many twists and turns:

“Under these circumstances,” they wrote, “we have no hesitancy in declaring that the government — measuring it by its constitutional obligations — had no alternative but to seek to suppress this treasonable outbreak by all the means and forces at its disposal, or else to betray the sacred trusts committed to it by the people; and therefore, throughout this fearful struggle, it has had our sympathy, and desire for its success.

For it has manifested no spirit of revenge, no wish to resort to extreme measures, if they could possibly be avoided; on the contrary, it has erred on the side of a timid and compromising policy, and in dealing with the rebels as misguided brethren rather than as enemies of mankind. Certainly, its forbearance, long-suffering, magnanimity, have had no parallel in governmental history.

“In thus expressing our sympathy with the government, we do not conceive that we repudiate or invalidate even the most radical peace principles that may be cherished by any of our Society. We simply pronounce upon the conduct of the traitorous secessionists, in plain view of its unmitigated wickedness; we measure the government on its own plane of constitutional duty; and we judge the people by their acknowledged standard of political and moral obligations to themselves and their country.

“By refusing to employ the army and navy against the rebellious South, through imbecility or a disposition to compromise, the government would assuredly hinder the progress of peace, and strengthen the hands of lawless violence. It was a more hopeful day for the cause of universal peace, as well as of universal freedom, when there was a simultaneous armed uprising of the entire North, after the capture of Fort Sumter, than before; for it indicated (whatever base alloy may have attended it) a resurrection of the spirit of freedom, of disinterested patriotism, of manly courage, of heroic self-sacrifice, where till then those sentiments had been paralyzed under the spell of Southern domination.

This lengthy statement was followed and “balanced” by a brief Testimony on Peace:

“Amidst the convulsions of the present time, we feel it our duty to adhere still more closely to our oft-repeated peace testimonies.”

“While we utterly condemn the rebellious course of the South, and recognize the constitutional obligations of the government to suppress it; we, nevertheless, feel that, so far from the present warlike state of the country disproving the validity or saving power of peace principles, we are the more confirmed in the conviction, that it is solely their rejection which has involved our nation in the present conflict of blood; and that their adoption would forever render slavery and war impossible.”

The minutes add that even this less than coherent statement was “Adopted by an almost unanimous vote, Sixth mo. 7th, 1862.”  Whereas the statement on the war was “adopted by a unanimous and hearty vote . . . after solemn deliberations thorough discussion.”

The notion that the war “Testimony” did not “repudiate or invalidate even the most radical peace principles,” and that it somehow adhered “still more closely’ to their record of pacifist declarations, veered from the grandiloquent to the near-absurd. But in these minutes can be perceived a frequent outcome of the collision between abstractions, bloody reality, and successful war hysteria and propaganda. 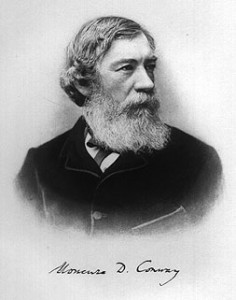 Moncure Conway, a Unitarian friend of Friends who had visited ad preached at Longwood, was very disappointed at such sentiments. He exchanged letters with longtime Quaker friends in Maryland, in which he lamented how current events

“showed that even the Quakers, . . . were forgetting their peace principles. Recognising the war as God’s agency for ending slavery, they were for a time indignant with me for proposing . . . that the war should be ended by Southern emancipation. How merely academic are the most radical peace principles when a flag demands blood!”

Yet to their credit, the Longwood Friends never failed to include in their calls for success on the battlefield, the ending of slavery as the true measure of the hoped-for victory.

Indeed, the group also wrote a Memorial to President Lincoln that made this case, then appointed a committee to deliver it to him personally. And by the intervention of allies in Congress, they succeeded in doing exactly that, on June 20, 1862. (pp17-19). Oliver Johnson read the memorial to the president.

Lincoln listened to their appeal, and replied, in part, that, “If a decree of emancipation could abolish slavery, John Brown would have done the work most effectually. Such a decree surely could not be more binding upon the South than the Constitution, and that cannot be enforced in that part of the country now. Would a proclamation of freedom be any more effective?”

The President having put this interrogatory as if he desired an answer, Mr. JOHNSON said:

“True, Mr. President, the Constitution cannot now be enforced at the South; but you do not on that account intermit the effort to enforce it, and the memorialists are solemnly convinced that the abolition of slavery is indispensable to your success.”

Lincoln was noncommittal:  The President said that he felt the magnitude of the task before him, and hoped to be rightly directed in the very trying circumstances by which he was surrounded. . . .

Many around Longwood were still uncertain how they felt about Lincoln, who was still months away from the Emancipation Proclamation which finally put his administration on the side of eliminating slavery as well as saving the Union. But most were squarely in favor of the war, as both divine punishment for slavery, and the means for its final extinction.

What do these historical snapshots  portend for American Quakers today?

NOTE: Most of this material is adapted from my  book, Remaking Friends, available in paperback or ebook here. 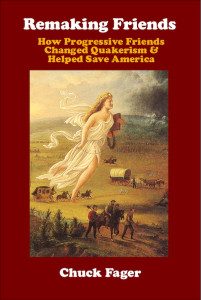