Has The Separation Generation finished dividing U. S. Quakers?

Yes, in a publishing sense: Book Three, the last of The Separation Generation series, is now done and available: Shattered By the Light; or The Ruins and the Green. 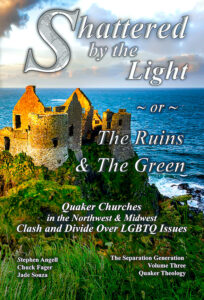 In Shattered by the Light, parallel conflicts over sexuality, the Bible and church governance erupt in and tear apart two Quaker associations half a continent apart.

Their stories, of Northwest Yearly Meeting in  the Pacific Northwest and Wilmington Yearly Meeting in the southern Midwest, are part of a larger wave of divisions that echo and illumine recent struggles in numerous other churches, and in American culture at large.

The Separation Generation series brings together reports and related documents about five such conflicts, all distinct but related, that have disrupted U. S. Quaker groups since the beginning of this century. The other two titles will be described in future posts.

Has this wave of schism and institutional destruction, the broadest divisions since the “Great Separation” of 1827, now crested and receded? We think this particular set may have, but are very hesitant about predicting the future. Yet certainly struggles over related religious issues are not finished in contemporary U.S. culture. Far from it.

The conflicts recounted here were sparked by confrontations over acceptance of LGBT persons and same sex marriage. But they included differences about the place and interpretation of the Bible, the nature of Christ and salvation, church structure and governance, and more mundane matters of money, property and jobs. Some took years to reach their conclusion.

The authors in Shattered By The Light began the work which culminated in the book in 2014. It started as articles in the journal Quaker Theology, and blog posts on this site. It culminated in a unique synthesis (or as some say, a remix) of journalism, history and theology. This series is the only published record of these divisions so far; we see it not as a definitive account, more as the beginning of study, reconsideration, and learning .

What about the title?

“Shattered” was a “term of art” in the breakup of one of the yearly meetings in the book. As the drama played out, the word, like many such, took on more unexpected layers of nuance and irony. This evolution continues.

“The Ruins & the Grass,” was both suggested by the cover photo that appealed to the editor, and a once-famous poem by Carl Sandburg. The struggles in the third book, like all those in the series, left much of their Quaker environment in ruins. At the same time, around these there are at least patches of grass, green with growth. What these green patches may grow into and become — who can say? But there’s plenty of fodder here for study and creative reflection.

Stephen Angell is the Leatherock Professor of Quaker Studies at Earlham School of Religion, author of many studies in church and Quaker history.

Chuck Fager is Editor of Quaker Theology, and a longtime journalist with special interest in both current Quaker events and Friends history.

Jade Souza is a graduate student at Earlham School of Religion, and has years of varied experience as an organizer.

And for the record, these three produced this volume, and The Separation Generation series, independent of any institutional connections, and their work speaks for itself.

This book and the series offer both a unique historical record and a singular resource for those concerned with the course of contemporary religious evolution and controversy, which continues and reverberates far beyond the bounds of one small denomination.

This excerpt from the conclusion of Shattered By The Light offers a reflection on the sweep and impact of the struggles this series has followed:

On screen, the January 2021 presidential inauguration was all appropriate pomp and circumstance: high officials on every hand, soaring rhetoric, striking singing and poetry, prescribed oaths, and a multitude of flags. It went off without a hitch.

But if the cameras pulled back, or widened their lens-angles beyond the west Capitol steps, resplendent in the chilly morning sunshine, a very different scene appeared: an occupied city, with 25,000 carefully-vetted National Guard troops deployed, fully armed, watching every street corner. They formed an impenetrable cordon around what had been turned into a (hopefully temporary) equivalent of Baghdad’s Green Zone. This broader vista showed a city that looked like it had foiled an attempted coup, barely. 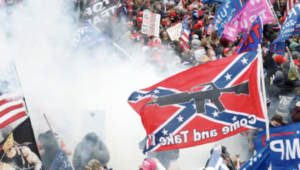 Oh, wait ― that’s exactly what it was.

Does this daunting political tableau have anything to do with Quaker strife in Wilmington or Northwest Yearly Meetings? Or any of the other Quaker stories in The Separation Generation series?

We think so. It was, in its larger public setting, a more ominous manifestation of many of the same conflicts that brought all the five divisions about. We will not delve into the present political context here, except to note that in general, evangelicals (and conservative Catholics) have clustered on one side, while “progressives” of numerous denominations (and none) are on the other. And that LGBTQ affirmation was a major, ongoing point of contention in both, plus struggles over biblical interpretation, other Christian doctrines, and forms of legitimate church governance.

These parallels are mirrored in other American denominations, much larger than the Religious Society of Friends: Episcopalians Methodists, Mennonites, Lutherans and Baptists have all faced schisms on similar issues in this century . . . .

The Separation Generation was compiled and published as a resource for Friends and others concerned with these issues, and their present and future import for our meetings, churches, and larger social order. 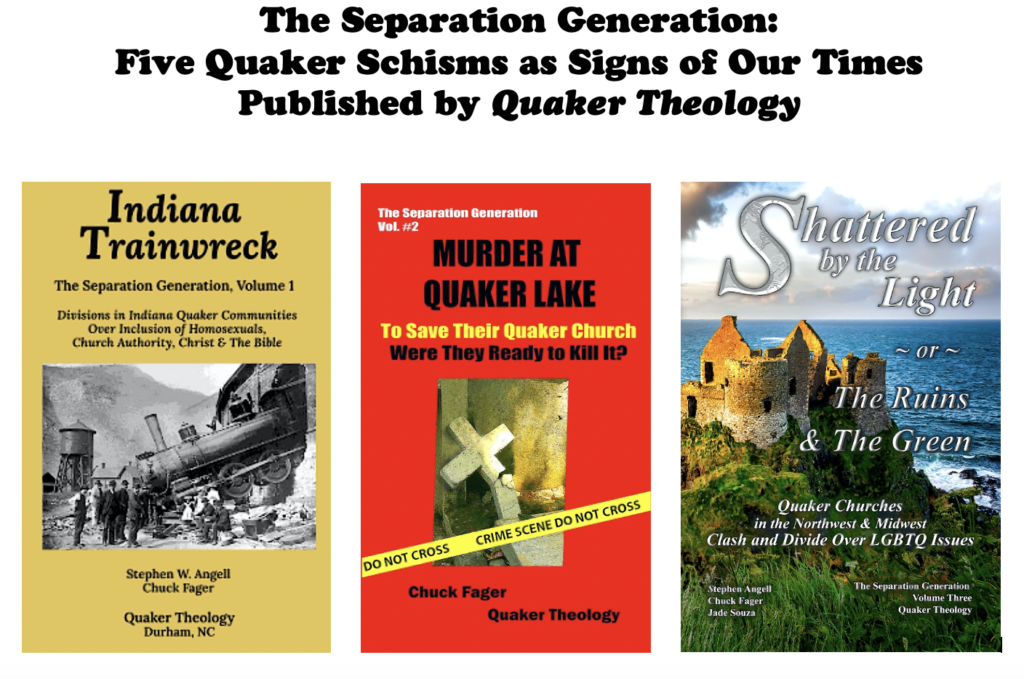 Shattered By The Light, here

One thought on “Is This The End of the Separation Generation?”