Scroll down for Contents 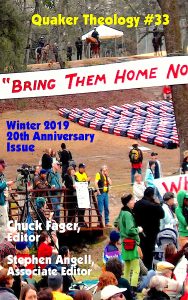 Editor’s Introduction
A quick review of the ground  covered in 20 years of independent theological work & publication.

Moment of Truth: Wilmington Yearly Meeting Divides over a Familiar Set of Issues, by Stephen W. Angell
This is the fifth yearly meeting breakdown chronicled by this journal in its tenure, and its pages remain the only source of significant reporting on these difficult spectacles.

The Separation Generation, by Chuck Fager
A detailed summary of the five schisms that have rocked American Quakerdom in this century (so far),  with an early assessment of their significance.

Imminence, Rootedness, and Realism: Eschapocalyptic
Action (or not) in the Age of Trump, by r. scot miller.
An effort to construct the elements of a 21st century Quaker theology, turning to such largely untapped sources as Malcom X, Dr. Martin Luther King Jr., and Reinhold Niebuhr.

A sermon Delivered by Lucretia Mott, at Yardleyville.
Bucks Co., Pa., Sept. 26, 1858, by Lucretia Mott
A contrasting Quaker theological vision, advanced by one of the most influential (but unheralded) American theological voices the Society has produced. Presented 160 years ago, this vision is still keenly relevant, hotly disputed, and its author still largely unrecognized as the theological giant she was. 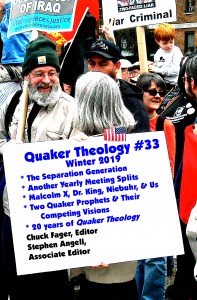 From the Editor’s Introduction:

Several years ago I visited a “Quaker” school in the South, supposedly to talk about peace. The school was expensive, semi-elite, aimed kids at highly-ranked colleges, and steadfastly ignored most of what was happening beyond the soccer fields.
I talked about the military industrial complex and the ongoing drive for world hegemony it supported.
Hands raised, a couple students asked why it was like that, why the USA needed so many wars?
Good questions. In reply, I opened a small Bible and read the first six  verses of Paul’s Epistle to the Romans – about how we all must obey “the powers that be,” because they were “ordained” by God, and they “bear the sword” to “execute God’s wrath” on “evildoers,” and we were all supposed to bow to it and pay for it.
“That’s why,” I said. “Many people believe the US is supposed to be God’s “authority” and “bear the sword” against those they see as “evildoers” in the world.
I closed the book and looked up. Blank faces, many mouths hung open.
I asked who knew of this passage.
Only one: the token black student. No one else, including teachers, copped to having even heard of it, or, you know, the book.
I told them that was too bad: it meant they weren’t getting full value for their parents’ hefty tuition payments. That’s because this passage was a theological keystone of the right-wing Christianity which practically worshipped the war machine and was then taking over the entire state outside their woodsy liberal enclave. If they were not familiar with it, they were not being adequately prepared to face this basic challenge to the world they were going to live in.
The teachers, at least, got the message; I know that because I was not invited back. Meanwhile rightwing christianity’s takeover of the state was soon complete, and remains near-total as this is written. Further, it is now also resident in the White House and fills most seats on the Supreme Court.
So theology as self- and group-defense was part of our 1999 response to the opening query about “Why theology”? It was current then; it was imminent when I visited that school; and it is immediate now.
But I also insisted there were positive reasons to write, read and talk about theology, which we defined as

“the ongoing work of self-examination and definition which any living faith community faces. This ever-unfinished work is at the center of Quaker Theology’s efforts; indeed, it provides us with our working definition of theology, which is: disciplined reflection and continuing conversation about individual and communal religious experience. It seems to us that such disciplined reflection is part of our religious duty. After all, in Matthew 22:37, Jesus includes in the first Great Commandment the imperative to love the Lord “with all your mind”; we think Friends today could do better at following this call.”

These positive reasons for theology are also still relevant, if seemingly sidelined by the rush of current events. It’s often been a struggle to make room for it, but we’ve worked at it.
[A sidebar: if we had stayed on our schedule of twice-yearly publication, after 20 years this should be Issue #40. The fact that it isn’t simply means that repeatedly in these times, life and history intervened and have slowed us down. . . .]
Back to positive reasons to do Quaker theology. One has been to maintain a space for “narrative theology,” in which individual Friends tell their religious stories, or at least part of them.

We have published ten of these, which recount, among others, the making of a Quaker atheist (QT #1); a heritage of nature mysticism and folk magic (QT #9); the last testament of a gay Quaker Christian (QT #14); a French Quaker’s journey from psychological warfare to Quaker nonviolence (QT #16); and the return of a son of Appalachia to his family’s mountain roots, and the beginning of his confrontation with the personal impact of industrial damage done to the land  (QT #29). There is rich material for theological reflection and discussion in each of these.
A related category of personal theology has come from what I call the “Divergent Friends”: Quakers who have thought deeply about theological issues, and acted on their convictions, but are not academics or members of conventional theological guilds. Many are not remembered as theologians at all, but a closer look discloses new depths and resources. . . .