With the awful weekend behind us, we can now return to our regularly scheduled programming, namely endless speculation about the Democrats & their 2020 presidential contest.

Even during the Late Unpleasantness around the Supreme Court, many media mavens kept offering comments about how presidential aspirants on & off the Senate Judiciary Committee were (or weren’t) building their 2020 “brand” in the midst of the swirling controversy. And I admit, I was pondering all that too.

If this now sounds rather ghoulish, it’s still what they (& I admit it, we) do, and some even get paid for it (not me; I’m such a sucker I do it for nothing).

So, with that lame apologia, here’s my handicapping report:

There were three identified aspirants on the minority side of the Senate Judiciary Committee: California’s Kamala Harris, Jersey’s Cory Booker & Minnesota’s Amy Klobuchar. 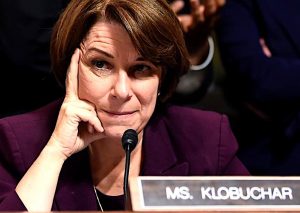 For my money, Klobuchar came across best, but none of them really stood out. Harris & Booker stumbled out of the gate, heckling Chairman Grassley about arcane procedural technicalities (extra points if you can remember any of them), which of course went nowhere.

Then neither of them really laid a glove on Brett Kavanaugh, despite his flagrant & frequent lying. I kept longing for someone to elegantly, icily call him a liar & a perjurer. None came close. Nor did any of them effectively smack down the libelous Lindsey Graham, or the odious ancient apostle Orrin Hatch.

The only one who defended her dignity was Klobuchar, who batted back Kavanaugh’s gratuitous insults about both her and her father as he blustered and prevaricated about his drinking. There was a welcome — tho all-too brief — flash of steel in her response— but then the Minnesota Nice reflexes kicked in and she squandered the opening.

The upshot was that all three aspirants joined their Dem colleagues who just sat there and let the Coverup Crew splatter them with slime like drunken Beach Week Yalies tipping over a row of porta-potties. The only real fightback came from the protesters,  shouting as they were hustled out; it wasn’t enough.

So of these three, Klobuchar seemed the most solid. But unless she learns to land a punch, no dice. One thing the protests inside and out in the halls made clear is that the Democratic base is boiling mad and fed up with getting rolled. Whoever their 2020 standard bearer turns out to be, she/he will have to be a fighter, and be seen as such.

This consideration applies to several figures outside the Committee too. Take the one some pundits regard as the presumptive front-runner, Joe Biden.

Although Uncle Joe is highly-regarded as a seasoned party elder, his long history also brings baggage: above all, it stirs memories of a double disaster from 1991: first, the humiliation of Anita Hill. And second, the empowerment of Clarence Thomas, whose legacy of embittered, reactionary jurisprudence has disfigured the Supreme Court for 27 years and counting.

Biden was Chairman of the Senate Judiciary Committee then. And while it makes me want to Ralph to voice this comparison, the truth is that his performance then was only barely less appalling than that of Ghastly Grassley last week.

Many younger angry millennials likely don’t even know this traumatic story; but we can count on the GOP’s propagandists to make sure they learn it. Maybe I can forgive Biden’s 1991 performance; he’s expressed regret about it. But though I say it reluctantly, in 2018, it’s a burden that’s disqualifying.

Then there’s the other legacy candidate, my hero of 2016 whose visage is carved indelibly on my personal Mt. Rushmore:

Sanders did the right thing. He was among the first to publicly oppose Kavanaugh’s nomination, and for the right reasons.

But he was not high-profile in the struggle. Maybe that was also the right thing to do: step back and leave the spotlight for women. We know he’s a fighter. But still . . . . How about Bernie for Attorney General?

And there’s one more aspirant who needs mention here. Within two hours of the confirmation vote, I had an email from this one. (I get dozens of such emails daily; I suspect somebody thinks my last name is spelled S-O-R-O-S).  This missive struck me as being very different from what I had seen and heard from the others. Here’s most of it. Look it over; can you see what caught my attention?

“Just before the vote, I thanked, hugged, and consoled the hundreds of people who were still outside the Capitol and Supreme Court. Women (and friends of women) who have relived the worst moments of their life these past few weeks and fought with courage for the millions of people who could not be here.

Today’s vote hurts people. It hurts every victim of sexual assault who’s been ignored, every woman who’s been told to be quiet, every person who’ll be on the losing end when Brett Kavanaugh casts a gut-punching deciding vote – in favor of states that keep American citizens from voting, in favor of corporations that cheat people, in favor of gun traffickers who put our kids at risk.

We lost this one. I don’t like to lose – and this one really hurts – but I’m not sorry I got in this fight.

Because here’s the deal: When we fight, we get stronger. It doesn’t drain our batteries. It builds up our muscles. And this was a righteous fight. We called out entitled, powerful men who use their privilege to protect each other. We lifted the voices of millions of survivors of sexual assault. We refused to be women who sit down and shut up.

Of course it’s Elizabeth Warren. And in it I hear a voice that’s much more in tune with the moment than any of these others.

Second, her writing combines the brains of a Harvard Law professor with a clipped, assertive, down-to-earth vernacular:

This is plain talk with a solidly authentic ring.

I was not among the thousands of women and men who thronged the Capitol. But I think I know what they’re feeling today: they want to keep up the fight, with leadership that’s ready to fight, capable of it, and can lift their flagging spirits as they regroup to face the next battles.

Among all of these names here, Warren by far sounds most like that kind of leader. And she’s got a real  track record.

Right now she’s concentrating on re-election to the Senate from Massachusetts, and leads in all available polls. She says she’ll decide about 2020 after that.

If my intuition is right — that her fighting voice and image best fits this moment and the angry, fired up base — this could well be her moment too.

This may not quite be Churchillian, promising blood, tears, toil & sweat. Yet it’s not so far from it, it’s realistic, and has a forceful  eloquence of its own.

And so far, the Committee newcomers,  Harris, Booker and Klobuchar, are all promising, but just not yet in the same class.

So these are my current speculations on the 2020 Democratic horse race. I’ll close with a quote from a Warren floor speech before the vote, about the ultra-secret FBI instant-“investigation”.  She declared flatly that, despite all its shortcomings,

If anybody can find a way to pry open those closed doors, it could be her. And if that happens, Brett Kavanaugh may soon have many new reasons to Ralph. And the White House could be faced with a real fighter in 2020.

It would be about time. Way overdue, in fact.

If you find this post useful, please pass it on.