Imagine this scene (part of it really happened):

It’s August 6, and George W. Bush is at home in Houston, or maybe at the ranch. He’s finishing a watercolor, or (stay with me) reading a book, though certainly not that heavy new biography, “Bush,” by military/presidential historian Jean Edward Smith, which takes another big whack at his tattered reputation.

Maybe he’s even pondering the big presidential decision by Harry Truman made 71 years ago, because for many of the rest of us, August 6 is Hiroshima Day.

Whatever. Meanwhile across town, in a big Houston pavilion, more than 20,000 people are jammed and jamming, screaming their lungs out for — the Dixie Chicks, in a raucous, triumphant concert that sold out in minutes months ago. It’s the Chicks’ first appearance in Houston in fifteen years. 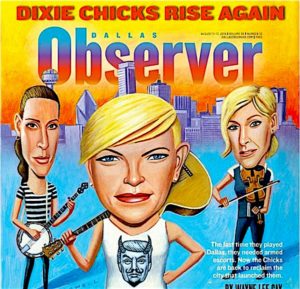 The same month, the Chicks broke the record at their gig in Dallas, where they started out 20 years ago. (Last time they played Dallas, though, more than ten years back, they needed bodyguards. Srsly.)

Okay — I really have no idea what GWB was doing that day. But the part about the Chicks is the truth.

And not even the whole truth. The Houston gig was one of three the Chicks had in Texas in a week, for which more than 50,000 fans packed the arenas and went totally starker nuts.

In case you just woke up, the Chicks were practically run out of Texas in the spring of 2003, after lead singer Natalie Maines dissed Bush on the eve of his Iraq invasion, saying they were sorry the President was from the Longhorn state.

Bush was riding high then, just a few weeks away from his preening thumbs up star turn under that “Mission Accomplished” banner on the aircraft carrier Abraham Lincoln. And by then the Chicks were dodging death threats and canceling gigs, their reign as the top female country band blown sky high by a massive cultural IED attack.

But that was then. Now the Chicks are back, older, wiser, but just as sassy, and as fine a trio as ever. And Bush, well . . . we don’t have time to pile on.

In fact, I’d say the Chicks are better now: the sadder but wiser undertone of the past decade-plus suits much of their music, and our cultural mood, just fine.

Their southern invasion came through Raleigh, North Carolina less than a week later, and has Atlanta and several other stops in the region on their MMXVI Tour card. And so far, they’ve conquered everywhere more thoroughly than Sherman at his peak. By God, the Dixie Chicks are BACK in Dixie.

I caught up with them in Raleigh, and couldn’t get enough. But that was not all: there were two special, non-musical bonuses in their Tarheel gig:

One was a give-back. Since for North Carolina this is the summer of the notorious HB2, the Chicks had to think about whether to cancel the show, as Springsteen, Itzhak Perlman and so many other top-flight artists have.

They didn’t cancel, but took time to make plain where their sympathies lay: they passed out thousands of free hats with a special label, and mocked the absurdity of the bathroom law between songs.

The other “bonus” wasn’t onstage: it was all around.

And in it I found something that could be of use to many of this blog’s readers, who are in the church business:

Good news, y’all: I found those folks you’ve been searching for so hard.

Yeah, the young’uns. What you like to call “Millennials.” Acres of them. Far as the eye could see. Thousands and thousands, packed in, screaming like all us geezers; and here’s something else: they knew the words.

As the concert went on, the implications of what was going on around me began to sink in. The next morning, I was set to head out to a dismal conference for a church body that has been all but stripped of its millennials. That group’s benches are now occupied (and evermore sparingly so) by those of us much closer to being Centennials. And from all I read, there’s many many other churches, big and small, that are in the same (sinking) boat. [Update, since that night, the particular church boat, which had made through 320 years, survived depressions, a civil & two world wars, has in fact capsized & sunk, leaving hardly a trace behind but for some scraps of flotsam circling under an empty gray sky.]

Where have all the young ones gone?? I wasn’t an expert on this; but I’ve read my share of books, articles, blog posts and so forth, filled with anxious prattling about the inexorable rise of the Nones and New Seculars, and the end of the (church) world as we know it, yada yada. And wondered about it myself.

But friends, you and I need wonder no more. There they were (at least the white, mostly female ones), spread out around me for what seemed like miles, cheering their iconic heroes, who had not only come through the troubles of the last decade-plus, but clearly have thrived, and are back and ready for more.

Call it reincarnation, resurrection, revival, depending on your theological shtick, but there they were, having a ball, and getting on with their lives.

Now, in the usual palaver about this, right here I should segue into an infomercial about my new book, and the $1000 per head weekend seminar in which I explain everything to the anxious elders and superintendents, and deliver my Five Guaranteed Gimmicks to bring all these young people back to church — or at least enough of them to save the jobs of the preachers and church-o-crats who are now sliding toward unemployment.

But naaaah. I don’t have any such gimmicks, just this eyewitness field report, which was stunning enough for me, and should be a Big Clue for many others.

In any case, the Chicks aren’t starting a church, or a political movement. (Though they do have their causes: the concert video screens featured Natalie Maines talking about a project – proclaimjustice.org – that works to free wrongly convicted prisoners; and numerous shoutouts to that bête noire of evangelical sexual uptightness, that Advance-Team-for-the-Anti-Christ, Planned Parenthood.)

But I will say that the combination of their music, steeped in the past fifteen tumultuous years, obviously spoke to the young crowd, with new or deepened layers of meaning.

Like, “Taking the Long Way Around”; listen to the words– it’s an anthem of leaving, pilgrimage and wandering, which could have been written by one of the pop sociologists churning out the where-have-all-the-millennial-gone screeds (if any of them know how to rhyme).

The same goes for “Wide Open Spaces,” which is about more than needing spreading scenic vistas: And “Long Time Gone,” which specifically mentions leaving the old church back home, and how the singer “ain’t had a prayer since I don’t know when.”

Then who could ignore the murderously witty rage of “Goodbye Earl”? Domestic abuse? “Rape Culture”? The Chicks are all in their forties now, but the song is hardly outdated. Maybe that’s why the Youtube video for it has more than ten million views, and the song in Raleigh got the loudest, fiercest cheers of the whole set. [Update: in August 2019, total views were 24.5 million. And counting.]

Still, the group wears its scars lightly. And with now nine kids among them, the Chicks are more about life and vitality than anger. Besides, today they and we have bigger things to worry about. So when last winter, Natalie Maines tweeted, “Just so you know … I’m ashamed Ted Cruz is from America,” nobody even bothered to get upset.

So here’s what I think I picked up floating amid this sea of their younger fans. These rising youth aren’t a bunch of lost souls either. Maybe this is the worst news for their old churches and hometowns: despite their share of troubles, they seem to be doing just fine, thanks. Especially with the Dixie Chicks to show them they can have fun along their pilgrimage, and as the trio’s closing number declared, still hope to find “A Better Way.”