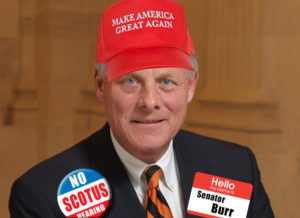 I mean, don’t you remember the landmark Burr Act to clean up hog waste & coal pollution in the state?

Me neither. Because there is no such thing.

I used to think that Burr’s main ”landmark” on Capitol Hill, from which he says he’s retiring next year, would be his effort to prevent the Senate Intelligence Committee from investigating the shameful & illegal U. S. torture program from the “War on Terror” years. When he failed in that, he later exerted himself to kill the finished report: no luck there either, though he did delay its full release.

Otherwise, I thought, Burr’s “career” would be remembered mainly for avoiding town hall meetings with actual citizens (as distinct from private  & profitable huddles with lobbyists). That and diligently growing his personal stock portfolio while in office in ways that hinted broadly of misuse of inside information.

If there’s ever a historic marker put up in Burr’s memory, the curious will have to search for it, and it will have plentiful blank space.

But despite all my “elite” blogger’s disdain, I have now been shown up as having grossly underestimated Burr’s legislative work ethic and its impact. The crushing exposé came in a report in  the New York Times on March 22, 2021.

It turns out that Burr is quite capable of working like a dog, by golly a determined attack dog at that. The Times even has the paperwork covered with bite marks to prove it.

I apologize for the error.

Of course, it had to be just the right burning, moral, lives-are-at-stake issue to get Burr to jump the leash and put down the stock market reports.

But three years ago, he found  it, sho nuff.

Senator Richard Burr went to the mat, all-out, in what was essentially a one-senator crusade. To the death.

And this time he got it done.

What did he do?

He stopped the federal government from saving the lives of thousands of Black people.

The  Times explains how he did it:

In 2018, Dr. Scott Gottlieb, the first F.D.A. commissioner of the Trump administration, announced the agency would ban menthol cigarettes.

Now, why would the FDA want to do such a thing, killing off one of the smaller of life’s pleasures? The Times has the answer

To  save Black American lives.

The Times: Covid-19 and the Black Lives Matter movement have put new pressure on Congress and the White House to reduce racial health disparities. And there are few starker examples than this: Black smokers smoke less but die of heart attacks, strokes and other causes linked to tobacco use at higher rates than white smokers do, according to the Centers for Disease Control and Prevention. And 85 percent of Black smokers use Newport, Kool and other menthol brands that are easier to become addicted to and harder to quit than plain tobacco, according to the Food and Drug Administration.

“Covid-19 exposed the discriminatory treatment that Black people have been facing for hundreds of years,” said Dr. Phillip Gardiner, a co-chairman of the African American Tobacco Control Leadership Council, which has been pushing for menthol bans in communities across the country. Calling menthol cigarettes and cigarillos “main vectors” of disease and death among Black Americans, he added, “It’s precisely at this time that we need strong public health measures.”

Let the record show that here Scott Gottlieb was that rare Trump administration official who was on the side of advancing racial equity. But he had misjudged the strength of menthol’s defenders, and one, The Times points out, in particular:

He was immediately opposed by Senator Richard Burr, Republican of North Carolina, one of the few unapologetically pro-tobacco lawmakers left in Congress.

Mr. Burr often promotes the jobs that the industry provides in his home state. His sons have two of those jobs: Tyler Burr works in state governmental affairs at R.J. Reynolds Tobacco Co., and William Burr works in regulatory affairs at Altria, which owns Philip Morris.

You might say Burr may not own stock in Big Death, err Tobacco, Instead his shares in it are of a more direct and personal stock.

The Times: After the announcement, Mr. Burr started dispatching oversight letters to the F.D.A. every Friday from mid-November 2018 through early January 2019, with the exception of the week of Thanksgiving.

Emails obtained under the Freedom of Information Act show the hundreds of minute questions from Mr. Burr that tied up staff for weeks. He also demanded personal travel records for the agency’s seven center directors and accused the F.D.A. of leaks.

My goodness. The relentlessness here is of Olympic stature: Sherlock Holmes left in the dust. The FBI ‘s best lagging, red-faced and out of breath. Hundreds  of questions. Reviewing personal travel records. Accusations hurled like Zeus’s thunderbolts. Heck, Burr even denounced the plan in a public statement.

The Times: The F.D.A. did not back down, but Mr. Burr helped to persuade the Trump administration to kill the plan in early 2019, according to former White House officials. Mr. Burr’s office declined to comment.

Declined to comment. Burr & his office have few peers inside the Beltway when it comes to a finely-honed ability to decline comment.

But comment or no, Gottlieb got the message. Just a few weeks later, in early March 2019, he resigned.

The reason [Gottlieb] gave was family and his weariness with commuting to see his wife and three children, who have remained in their Westport, Conn. home since he took office. But his announcement caught many in Washington and the industries he regulates by surprise and raised questions about whether his push to reduce teenage vaping and lower nicotine levels and ban menthol in cigarettes will continue in an administration that generally has a hands-off approach to business.

More time with family. How original. Of course, the “raised questions” were soon answered: menthol stayed.

So there you have it. I was also wrong to say Richard Burr will leave Washington without a landmark achievement to put on that historic marker: an outline of Scott Gottlieb’s scalp would be just the thing.

And now I also know where it ought to be placed: across the road from the biggest integrated cemetery in the state. In sum, helping shorten Black Lives with menthol tobacco, along with defending torture. That’s Richard Burr’s public legacy, and it will smolder & smoke far longer than his memory.

7 thoughts on “An Apology (not quite) to Senator Richard Burr”