To everything there is a season . . . and in the small field of Quaker publishing, this seems to be the season for books to help Friends, and friends of Friends, get through hard times.

I won’t rehash the reasons for this spurt; they’re as near as the morning’s headlines. It will suffice to cite recent comments by Kimberlé Crenshaw, a founder of the much-maligned Critical Race Theory, in the Washington Post, about:

“[T]he history of progress around race in the United States: Modest reform creates tremendous backlash. And sometimes the backlash is more enduring than the reform.

Consider, we had about a decade of Reconstruction. And [then] we had about seven decades of white supremacy, racial tyranny, utter and complete exclusion.

[Then] We had probably a good decade, maybe a decade and a half, of active civil rights reforms. And then three, four decades of conservative retrenchment, reactionary responses to these reforms that allow for people to say what they’re saying now, which is that anti-racism is racist, your civil rights violate my civil rights.

These are very old and repetitive ideas. So the reform, retrenchment frame is now taking place in the midst of a tremendous resurgence of anti-democratic, anti-inclusionary politics.”

The one thing I would add is that the “retrenchment frame” that seems to be building now concerns much more than race: women’s rights, labor organizing, assaults on the press and education, book banning, LGBT rights, forging a de facto religious establishment, and a drive against what is called the “administrative state.” To name a few.

No wonder so many progressive folk feel beleaguered and depressed.

Professor Crenshaw’s denunciation of retrenchment was incisive. But when the interviewer followed up by asking,
“how do you think about reform in a way that doesn’t cause one step forward, seven steps back?”

Her reply was candid but empty: “It’s my constant question,” plus a couple filibustering paragraphs to fudge the fact that she had no more to add.

I won’t chide Crenshaw for her lack of an answer, because I don’t have one either, except to repeat cliches: organize & vote & hope for the best.

And then one more, I trust maybe not quite as cliched: learn to endure.

Which brings me back to the new books for Friends and friends about getting through hard times (I’m skipping the ones about preventing or escaping them.)
There are several recent titles, but here I’ll focus on my entry, new on the shelves just last week. 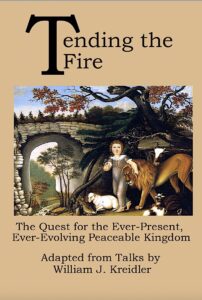 It’s called Tending the Fire, and it’s not really “mine,” since I didn’t write it; but I did make it happen, so it kind of is.

The book is by the late Bill Kreidler, a gay Friend from New York and Boston who in a mere 48 years practically invented the field of violence prevention for school systems. He also fell into a bad relationship, had a severe bout with alcohol and drugs, then clawed his way back with the help of other LGBT Friends, his Meeting, and twelve step recovery.

As Bill’s recovery evolved, it became a “spiritual awakening” which combined with Bill’s experience and brilliance as a communicator into a unique ministry to Friends, in speeches and retreats. His messages were not about dealing with hard times; rather they exemplified coping with them “in real life,” and, to use a venerable Quaker phrase, “with divine assistance.”

This ministry was further refined, as by fire, when Bill was diagnosed with AIDS in the early 1990s, still before the effective treatments arrived. He spoke of this, quoting another Friend who had died of HIV, “who used to like to say that, whenever you think you have everything all worked out, God will send you lab practice.”

Bill’s “lab practice” was in part distilled in his addresses to Quaker groups. Several of them were recorded, and the audiotapes were passed hand to hand among a growing circle of fans who could almost have been called disciples. (That would include me.)

I long had a cherished set of five such tapes. In fifty-five years among Friends, I have never heard vocal ministry that was the equal of Bill’s. His work, I concluded, was a landmark of Quaker spirituality lived out with dazzling clarity, astringent humility, as well as steadfastness amid pain, in all a rare treasure in our very troubled times.

I was also one of several who urged Bill to make them into a book. His replies were evasive and vague: maybe; or not yet; or he was working on something like it; or a mysterious grin . . . .
But the “lab practice” of an AIDS-related cancer ended all that in June 2000, and no sign of a book has since turned up.

In the years since, I have spoken to many others who had heard Bill, live or on tape, about the need to preserve his work for the rest of us, and others who come after. Many agreed, but nothing really happened until this past year.

Maybe it was extended reflection during the stifling extra down time forced on us by Covid; or the prospect of our own mortality; or aging heightened by the surrounding plague.

In any case, in late 2021, Bill’s longtime friend, John Calvi, and John’s husband Marshall Brewer set about to put the tapes online, and they are now available, at no charge, at williamjkreidler.com .

Earlier last year, another of Bill’s friends, Chuck McCorkle, began getting the tapes transcribed, and I started editing and compiling them. It was a lot of work, but now the book is also ready.

This is Bill’s message, as best recorded up until his health gave way. It charts a remarkable spiritual evolution, facing much dead-serious “lab practice” with insight and many bursts of humor.

It’s been pieced together, rather than being the polished text that Bill would likely have finished if he had had more time. And while he does speak of what has “worked” for him, he does not lay out a recipe or regimen for coping with hard times.

Tending the Fire is more a testament, dispatches from his journey inward, and into the “valley of the shadow of death,” ultimately solitary, but not alone.

Isn’t that where we’re all headed?

Yes, and hard times make for deeper shadows on the path. Learning to endure is likely a daily work. What I can tell you is that every time I read or listen to Bill, it helps me endure — another day, another hour, another laugh.

And if, as Kimberlé Crenshaw pointed out, the pending hard times may last several decades (which I believe, but most of which I don’t expect to see), I’m convinced they can help others endure as well. I’m honored to have helped make his witness available in print.

[NOTE: I’ll be talking about Bill and Tending the Fire on Zoom at the FLGBTQC Midwinter Gathering, For information and registration, click here. And the book is available here, in paperback and kindle. By the way, all the royalties will be donated to FLGBTQC.]