Recently I read the amazing account of the Great Black Migration from the South, The Warmth of Other Suns, by Isabel Wilkerson.

It’s a fine, fine book, and its relevance here is that, paradoxically, until it was well underway, there was no such thing as “The Great Migration”; that is, no one named or organized it, no one “joined” it.

Rather, there were individuals & families fleeing for their own survival: seeking escape from the personal costs of official southern racism, grinding poverty and unrestrained violence. Only after such private decisions were acted on by hundreds of thousands, over  decades, did scholars & writers come along to christen, study and begin to chronicle it.

Yet while “spontaneous” and unorganized, the Great Migration was indeed real and momentous, with national impact that’s still being felt.

A change equally unorganized & unheralded, potentially as momentous at least for us is, I believe, underway in the U. S. liberal Quakerism I discovered in 1965 (after ditching pre-Vatican II Catholicism).

This change does not necessarily involve moving from physical places, but rather from one economic and class location to another.

When I found it, Liberal American Quakerism was a solidly middle class “sub-subculture,” nearly all white, with a heavy academic/educational tinge. (I acronym it “EMCWAQE”–“E” now as in “Ex-,” or as vocalized, “EmQuake.“)

I don’t name EmQuake to flagellate anybody (or myself). After all, everybody & every group is conditioned/limited by its surroundings, so let’s just skip the trendy guilt-trips, which don’t fool anybody anyway, except sometimes us.

However, now in my 53nd year in this group, I see more & more of what’s been well-documented by economists/pollsters, etc. on a broader canvas, namely that these segments (the middle class part of EmQuake) are in a steady slide of downward mobility. We are not leaving our economic & class “homes” voluntarily, but like many of those in the Black Migration, being forced out.

This slide lacks the epic scale and the moments of high drama that Wlkerson’s book captures so well. (I mean, her story had lynch mobs, terrorist sheriffs, and years of field labor under a punishing sun. But who’s going to write an un-put-downable memoir about being stuck with student loan debt for most of their working years?) Besides, in the Great Migration, the pilgrims moved with hopes for improving their situation, which many did.

This reverse follows almost 50 years of post-World War Two expansion of EmQuake jobs, income, and seeming influence. And if current Congressional plans come to pass, this slide will take a DEEP new dive for most of us outside the upper middle.

Besides erosion of income & security, another big manifestation of the decline is loss of TIME: people are working more (both spouses in such households); it takes more concentrated effort to keep households together & kids on track to the higher ed that used to maintain middle class status & income, etc. The “weekend” shrinks, even as ever more is crammed into it. 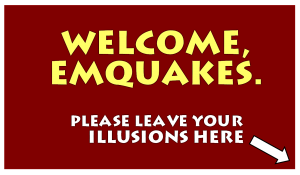 But as in the Deep South, both this downward economic mobility & the time-crunch are experienced & perceived mainly as individual or single family issues –that’s how we’re taught to think & perceive in these Individual States of America. It’s hard for very many of us to see past this tree to even the edge of the forest, or admit that we’re part of it.

What does this shift from the UP to the DOWN class escalator mean for “voluntary associations” (aka churches)?

That too has been well-documented: it makes their old middle class patterns increasingly squeezed & dysfunctional. Church was once central to many families and their communities. 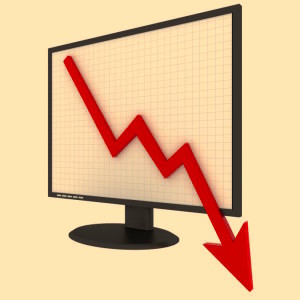 Now it has to compete with work, school, family pressures, politics, invasive media, plain old fatigue, discrediting scandals, and so forth.
Thus [with some interesting exceptions which we don’t have time for here] church, along with many other former social pillars, is increasingly being marginalized for many.

What’s the remedy here, especially for Meetings & Friends churches? That’s not so easy to see.

I hear a lot about new church marketing plans, ways to tweak & repackage the old patterns to corral more of the Squeezed folks and that magic group of their offspring, The Millennials; but I don’t see many results–the slide continues. And it looks to me particularly serious for EmQuakes: our “secure middleness” is gone-with-the-wind, but it seems still baked into our institutional & cultural Quaker bones. The baking started well before 1945, and I’m not at all sure American Quakerism, especially the liberal branches, has a vision of survival without it.

One suggestion, though: what if we could begin to reimagine EmQuakes as a no-longer “solid” middle class group? I don’t think there’s even a name for this condition yet: “ex-middle class”? “Newly-Almost Poor”? “Sliders”? “The Emerging Precariat.” Other ideas?

By whatever name, though, how do non-prosperous folks “do church” (or meeting)? Are there non-prosperous segments of American Quakerism (past or present) to learn from?

And what about the psychological/emotional work such a rethink would involve? To be sure, EmQuakes have always been “concerned” for the “disadvantaged”; but that whole outlook is 100% philanthropic. that is, it moves socially from “above” [i.e., more affluent/powerful] to “below”: We-the-prosperous, aiding Them-the-deprived (particularly the “deserving poor”).

Again, I’m not interested in flagellating ourselves about that; EmQuakes have done a lot of good work for a lot of people in this mode, Thank Thee Very Much. It is what it is.

Or at least, it was what it was.

Yet the point remains that it’s a huge shock (trauma is a better word) to go from one side of that transaction to the other. And that’s where I think many (most?) of us are headed.

Dealing with the impact (PTSD — Post Traumatic Spiritual Distress) will involve more than economics; it will be a heavy-duty religious task. It means the recalibration of our outlook on both our Religious Society & its work in the world.

As far as I can tell, it doesn’t seem like most EmQuakes are well-prepared for any of this, in which case one would expect a time of confusion, grieving, and internal disorder. Which, if you look beyond the diminishing cozy Quaker bubbles, is already plentiful in U. S. Quakerdom.

Where these musings are pointing is toward internal work: seeking & threshing about “American Quakerism During The Big Slide.”

Such labour is not to be confused with the current thrusts of outward Resistance. That must continue (except for those who have arranged not to get old, disabled, de-careered, or sick); yet this internal work is distinct, with its own imperatives. And, to be plain, its own addition to the Time Squeeze. It might start with discussion & study, as well as learning how to minister to each other through such periods. And recovering a once-vigorous practice of mutual aid.

I realize this is not much of a detailed program. It’s like correctly noticing that a thick fog has descended all around us in an already gloomy forest: knowing that is useful, but doesn’t shed light on the winding path in and through the gloom. But maybe it’s a starting point. 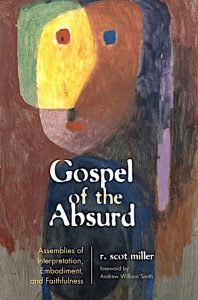 One younger Friend (younger than me, at least) has just published a kind of manifesto for such deliberation: Scot Miller, of upstate Michigan. His book is Gospel of the Absurd.

Scot argues that the way forward for EmQuakes (tho he has his own peculiar terminology: he calls them/us Christians), is to embrace the slide, embrace the stripping of our liberal dreams of affluence-that-underwrites-influence, turn all that stuff upside down, and replace it.

With what? With the absurd. Or at least practices that sound absurd to the  well-conditioned declining middle class mind. Such as:

With a communal, small-scale, deliberately marginal set of “ministries,” especially alongside those suffering directly from current injustices. (He lives not far from Flint, Michigan, and works often among the many there who are still without safe water). And he wants this all to be regularly marinated in ongoing Bible study and serious accountability to the group. (Serious = their way or the highway.)

If this sounds to you like something close to the Amish, or maybe the Catholic Worker, or various monastic efforts — then you’re on the right track.

Scot himself dresses plain, runs a dairy farm, and hopes to start one such agriculture-based community on his acreage. He’s a hybrid, Quaker and a Brethren church minister, about equally attached and ticked off at both.

And he’s come to this proposed program, both through a turbulent personal journey, and after a tracking his way through seminary. There he tackled a stack of dense theological tomes, on postmodernist, womanist, social gospel, Yoderian, Cone-ian, Hauerwasian, Derridadian & Macintyrian approaches to theology. (But if you don’t know these names, don’t worry).

Do his ideas make any practical sense? Are there additional unconventional approaches we need to articulate and wrestle with? (Other than the fallback, “More of the same”?)

Personally I’m not at all sure his plan will work for Quakers. But I can’t deny we’re in a tough time, in need of some renewal of thought and discernment, and I respect his thinking and determination. Plus, I have friends in the Catholic Worker movement, and the outsized impact of their version of this approach over 85 years is not to be gainsaid.

Yet, could such an approach really get any traction among the hardened individualism and obsession with formal political activity that preoccupy most American Friends today?

Among those who still feel secure, probably not. But for the EmQuakes, Friends who see their future, and that of their children and grandchildren, riding on that escalator — for those of us who are beginning to realize we may be part of another unwilling, gathering “Great” Migration (downward rather than to one of the compass points), it’s worth at least a serious look.

9 thoughts on “Quakers Getting on the DOWN Escalator”