— And I can’t forget Florida Governor Rick Scott: he did what it took. So did UF President W. Kent Fuchs; and some others, we’ll get to shortly. [NOTE: Update on shooting arrests below.] 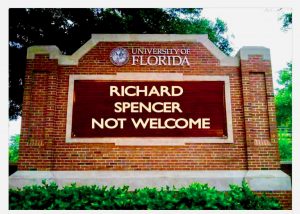 [BTW: I wasn’t in Gainesville, this commentary is based on reports from several respected media who were on the scene, especially: the Orlando Sentinel; the Miami Herald; the Gainesville Sun; and the Washington Post.]

It’s early, but the speech by Richard Spencer at the University of Florida on October 19 could turn out to be an important precedent, and  a “teachable moment” for American colleges.

One part of this precedent is that on a 52,000 student campus, the vast majority agreed with leaders of many stripes, and stayed away.

A Miami Herald column by Fabiola Santiago put it well:

Without an audience, Richard Spencer is just another racist nobody.
He’s made a name for himself out of stoking prejudice and he counts on stirring enough emotion to draw crowds and publicity and keep his hateful gig rolling along.
There’s only one antidote to this kind of modern-day creep: Don’t make his ruse worth his while.
Let him speak, but don’t reward him with your presence.
Stay home.
Play some Beatles.
Imagine.

But we don’t have to imagine: in fact, the auditorium where Spencer spoke was no more than half-full.

Further, nobody on campus had even invited him: as a public, tax-supported  institution, UF rents some of its facilities to public customers; Spencer’s manager simply booked the room. Judges have rightly issued orders upholding such public access for most speech events.

Of course, Spencer wanted a huge media circus, and he got one; but he didn’t draw a meaningful audience from his targeted institution. They handed out 800 tickets for the event, but only about 400 showed up, including numerous press.

He also, with difficulty, got to make his speech, in the face of nonstop jeers & boos, advocating that a “white nationalist ethnostate” be carved out of the U.S. by “peaceful ethnic cleansing” (whatever that would mean).

On the way out, he was crowing:

Orlando Sentinel: “As . . . the throng of protesters who disrupted the event headed for the exits. Spencer insisted they hadn’t defeated him.

Outside there was a crowd of hundreds of protesters: rowdy, often profane, but essentially nonviolent; two persons were “detained”; a few pro-Spencer fans were roughed up, but were then escorted away by police.

Of course, the protesters had lots of help in keeping their overall cool: 500 or so police, state troopers, many heavily armed, including SWAT team snipers perched on the roofs and balconies. 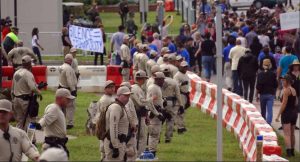 One wannabe protester, Ryan Simonovich, had what I thought was a good plan:  “to attend the event and then walk out when Spencer started speaking to “demonstrate my contempt for his odious views.”  Simonovich acknowledged that Spencer’s right to speak was protected by the First Amendment and he would not try to silence him by yelling.  “A roomful of angry liberals shouting at him does more to promote his ideas than people walking out in contempt does,” he said.

Reports are that the massive security presence cost more than half a million dollars. To me, that’s not too high a price for “teaching” the lesson that free speech, even such odious kinds, needs to be preserved, especially on a university campus; I call it a tuition surcharge.  Those who would have violently thwarted Spencer’s appearance were effectively restrained. 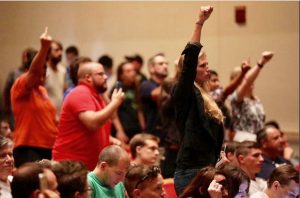 Spencer insisted to the noisy crowd that “You have all been given the amazing opportunity to take part in the most important free speech event of your lifetimes . . .”

While this was in many ways a gross exaggeration, he could be partly right, if–

— If public and campus officials decide to stick to the precedent of maintaining adequate security for unwelcome speakers;

— If those who get their kicks beating up speakers they don’t like are deterred enough to turn to some other recreations;

— If other protesters focus on the message and not mayhem; There was a moment in the outside protest when this emphasis became very clear. A man with swastikas on his shirt was being punched by several protesters. But

The majority of the crowd, which alternatively chanted “F–k Nazis, go home,” and “Whose streets? Our streets,” strongly spoke out against the idea of violence.
“No!” One protester yelled. “Don’t do that, please. It’ll go against everything we’re here standing up for.” The man was escorted to the police lines, where he found shelter.

— And if even more students on more campuses, like most at UF, choose to go on with their campus lives and simply ignore publicity hounds like Spencer; and

— If the media get past their Spencer fever and give him and his sort  only the token coverage their garbage warrants.

It could happen. If Spencer was hoping for another Charlottesville in Gainesville, he didn’t get it. One of the best, most sensible  statements I’ve seen about this affair came from the UF Black Student Union, in a letter to students of color:

“If you chose to protest, it is imperative that you utilize sound judgment with every action that you take and not be provoked to resort to violence. Your safety and physical well-being takes precedence over the ignorance that will be spewed from the termites in the foundation of togetherness that embodies the Gator nation. . . .
We will overcome. This experience will only further unite us and constructively focus our energies into creating a better society for future generations.”

Amen. If we’re lucky, the University of Florida appearance could mark a turning point for Spencer toward becoming “another racist nobody,” ranting in well-deserved obscurity. There he and his ilk can then get the most attention from those who are tracking the ones who may turn from talking hate to planning terror.

You may say that hope makes me a dreamer.

But as the BSU & most UF students showed, I’m not the only one.

UPDATE, October 20: It didn’t take log for talk of hate to turn to action: three Spencer supporters were arrested after one allegedly fired a gun at protesters about a mile from the UF campus after Spencer’s speech had finished.  The three then fled in a jeep, but were stopped by sheriff’s deputies about twenty miles northwest of Gainesville on Interstate 75.

The three were jailed on charges of attempted homicide and are bing held on $1 million to $3 million bail.

“This is a mess. I’m disappointed in the course of things,” he said. “It appears that the only answer left is violence, and nobody wants that.”

William Fears told the Sun that he believed James Fields, who drove his car into a crowd of protesters in Charlottesville, Virginia, wasn’t unjustified. He also said alt-right movement supporters were “pushing back” against leftist supporters.

“It’s always been socially acceptable to punch a Nazi, to attack people if they have right-wing political leanings,” Fears said. “Us coming in and saying we’re taking over your town, we’re starting to push back, we’re starting to want to intimidate back. We want to show our teeth a little bit because, you know, we’re not to be taken lightly. We don’t want violence; we don’t want harm. But at the end of the day, we’re not opposed to defending ourselves.”

So maybe Spencer almost got another Charlottesvile after all.

One thought on “Richard Spencer, U. of Florida & Free Speech: All Winners. But It Was Ugly.”