The eleven authors in the new book, “Passing the Torch” were invited to draw on their several centuries of living and Quaker experience to offer “Advices,” informal counsel for readers.

A few made lists. Others wove such insights into their texts. Others left this part of the work implicit.

Here are some selections from these “Advices,” presented not as commandments, but more as food for thought and, perhaps, discussion.

1. Choose your perspective on life, and whenever possible, choose joy. One of my favorite parables is of two men, seated beside each other on a plane when the pilot’s voice was heard issuing news no traveler wants to hear:
“We’ve had engine failure, the plane is going down, and we don’t have enough parachutes for all of you. I suggest that your best chance for survival—and it’s a slim chance—is to kick out your window and jump.” The two passengers looked at each other, then one jumped, covered his eyes, moaned aloud about the terrible fate ahead, and sure-enough, he hit the ground and died. The second passenger—also without a parachute—jumped out of the window. But he decided to hold open his coat, like the wings of a bird, in order to slow his descent. Holding his coat open meant that he couldn’t cover his eyes. So, as he descended, he noticed the rich Fall colors on the trees. He also noticed how cute the children looked from above, as they played in the park. “Hmm,” he thought, “this must be the view that God gets, every day!” But of course, this second passenger also hit the ground, and perished. The moral of this parable is that while we do not always have control over our circumstances or outcomes, we always have a choice about our perspective.

Do not bother children when they are skateboarding.
Don’t fool yourself into defining what Quakerism is or how it will look for our spiritual children. You and your generation don’t own the tradition.
Don’t think you know who will pick up the torch and carry the flame into the future, however much you think you have the gift of prophecy. You run the risk of snuffing out the very spark that is the future.

Carter Nash: 1. [Since my cancer diagnosis] I have since been in a clinical trial, had radiation therapy, lots of tests on an ongoing basis. I’m up at 2am to take medications. I deal with the symptoms that women do during menopause (hot flashes, night sweats, mood swings) — so men, be nice and try to be understanding, it might be you one day.

2. [As an African-American Friend] One group that I have had to learn to forgive and try to ignore is the white saviors. I’m tired of their being offended for me (if you think I might have been offended ask me before you go complaining, I might be fine with you thinking I should have been offended by something, and if I was I can ask for help dealing with it, if I need any).
I’m tired of hearing them saying what acts are racist. I’m tired of them telling everyone else they have the solution to either racism generally or a problem they perceive. I am tired of hearing from them how people of color should deal with racism (which we do every day). In many ways I find the actions of white saviors to be saying people of color don’t have the ability, the agency to work for their own improvement, to demand their own equality to strategically plan to achieve their goals.

H. Larry Ingle, historian:
1. “[The 1827 Hicksite-Orthodox schism left] Quakers so divided that it required a hundred and thirty-five years and many divisions later to overcome all the bitterness that ensued. Indeed, this animosity’s legacy still feeds an obvious distrust among Friends of different persuasions to this very day. It also makes too many Quakers averse to conflict, lest raising fundamental and basic issues among themselves might lead to other schisms. Speaking truth to power, a phrasing coined by Quakers in the 1950s when the AFSC published the seminal pacifist pamphlet Speak Truth to Power, is not something Friends do among themselves even today. They seem fearful of where honesty might lead. They need to get over that assumption.”

2. The lesson I take away from a lifetime of studying Quaker history is the one I articulated at the end of [my book] Quakers in Conflict, one often ignored . . . . True, I described and documented the high-handed unsavory tactics of [the] Orthodox [faction] but I also averred that some body has to have the authority to make judgments within Quakerdom. Authority need not become authoritarian, but neither can individualism be allowed to splinter the group into its constituent members, for then there will be no group. It is a hard path to walk this fine line between these two options, and given Quaker history nearly impossible to make much headway, but treading it is something that is certainly required.”

Chuck Fager: Quakerism is sometimes buffered from the full brunt of our own internal evildoing, not from virtue but rather by its flat decentralist structure. But make no mistake: bad Quaker things happen, and if you’re faithful enough for long enough, some will happen to you. Or maybe you’ll join in with them, if only by complicity. As the late M. Scott Peck put it in, People of the Lie: “Since the primary motive of the evil is disguise, one of the places evil people are most likely to be found is within the church. What better way to conceal one’s evil from oneself as well as from others than to be a deacon or some other highly visible form of Christian within our culture.”

Jennifer Elam (who was allotted four, because they’re very brief):

Tell the Truth (knowing the complexities of Truth).
Honor your parents (and they don’t have to know EVERYTHING you do as an adult); honor your heritage and ancestors.
Listen to your teachers (teachers are everywhere).
Laugh a lot; humor is important. 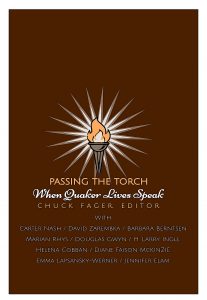 And don’t forget our Book Launch Party on Saturday Nov. 23, at Providence Friends Meeting, 105 N. Providence Rd. in Media PA, noon to 3PM. Free, with food, readings, authors to mingle with, and music from and about our generation.